Fall Colors in the Smoky Mountains
Headed easterly across Tennessee with the intent to spend time in the Appalachian and Smoky Mountains searching for some fall colors. My information said the third week in October was peak season. 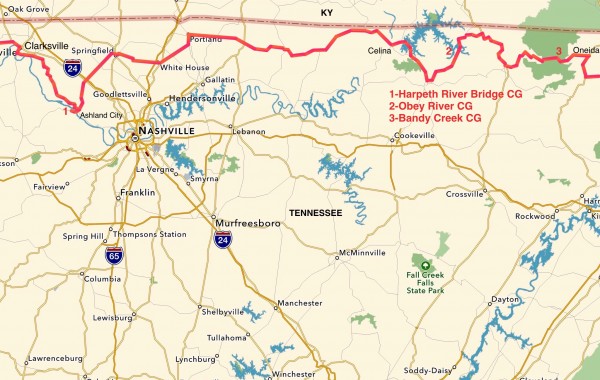 Tennessee
It was still hot and humid during my trip across northern Tennessee; so, I chose camps with electric in order to run the air conditioner. Two Army Corps of Engineers campgrounds, Harpeth River Bridge and Obey River at Dale Hollow Lake, plus Bandy Creek CG in Big South Fork, fit the bill. 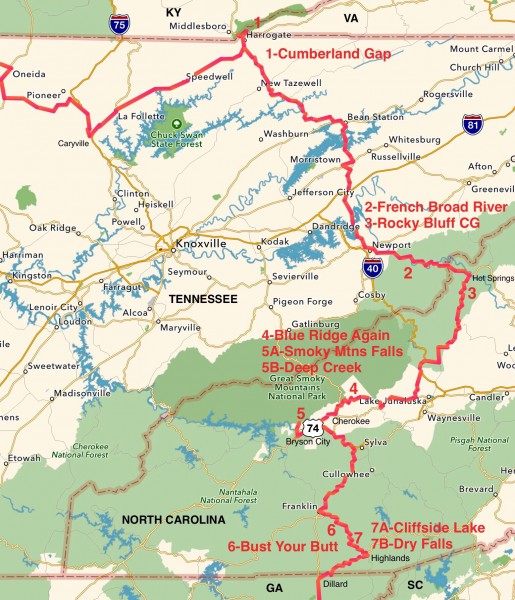 Tennessee and North Carolina
There was time to do some more exploring; so, I went to see Cumberland Gap, a bit of the Blue Ridge Parkway, and into Great Smoky Mountains National Park. Along the way, I enjoyed great views of rivers, lakes, and waterfalls. The Cullasaja River area provided great scenery. Apparently, the fall colors were late this year; so, I didn’t see as much as I had hoped.

Late Fall in the Deep South
My next goal was to see a few new things, visit friends and family, get maintenance done on Tardis, and to take care of some personal business. So, it was further south I went. 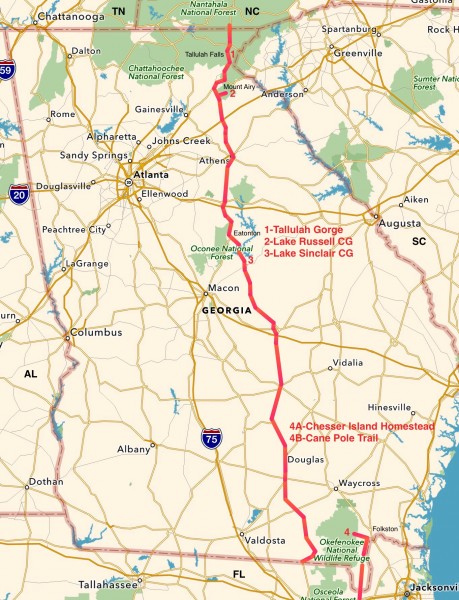 Georgia
Continuing into northeast Georgia, I stopped to see Tallulah Gorge with its deep canyon and several waterfalls. Afterward, I quickly drove down through the state; and then, over to the southeast corner in order to visit the Okefenokee Swamp National Wildlife Refuge. 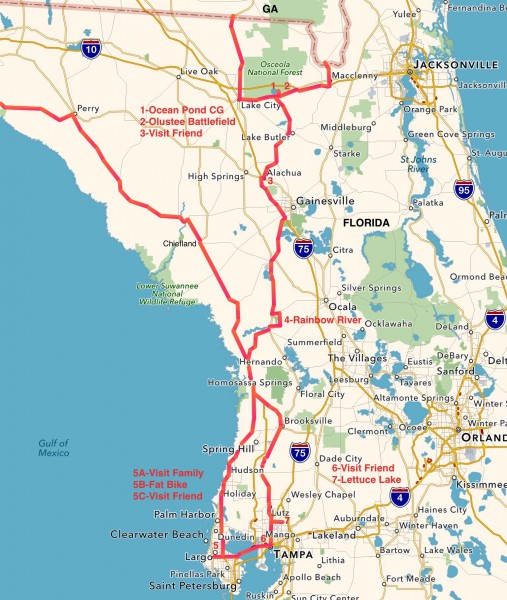 Florida
The plan was to visit friends and family, to get my Fat Bike, and to have some maintenance work done on Tardis. Those were all accomplished. I was also able to see the Olustee Battlefield, the Rainbow River, and Lettuce Lake. An option was to spend the winter months going to other places never seen before. However, I was not comfortable and the itchy feet were eager to return to the southwest. 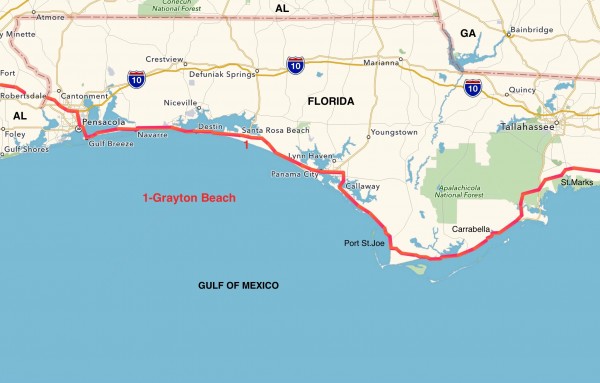 Quick Trip Across the Gulf States
The urge to go west was not to be denied. So, I headed out on the long journey. My last camp in Florida was at Grayton Beach in the panhandle. There was some interest to see a few things along the way, especially in Texas. However, the weather did not want to cooperate. 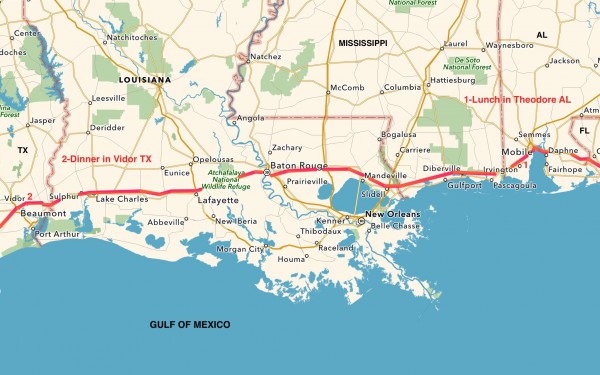 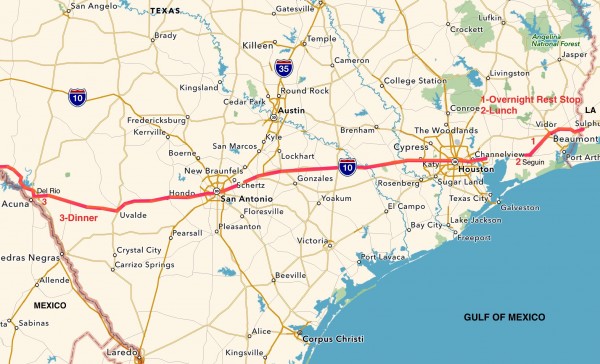 Texas
I made a stop for dinner in the small town of Vidor in eastern Texas. And, a short while later pulled into a Texas Safety Stop for an overnight sleep. In the morning, I was on the road again with only a stop for gas and a bite to eat. And, of course it started to rain again. 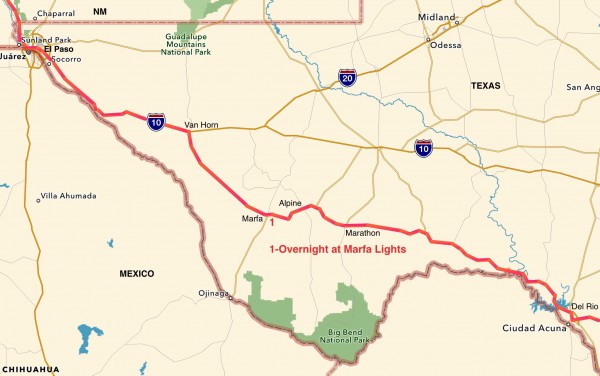 As I made my way across Texas, it continued to rain. Those thoughts of seeing some interesting spots in the Lone Star state faded with the moisture. A stop for dinner in Del Río made me consider a camp at Amistad NRA. Darkness was a couple of hours off, so I drove on. Eventually, I reached the Marfa Lights rest area and stayed overnight. The next day completed my dash to the west as I rolled through El Paso.

Holidays in New Mexico
I arrived back to New Mexico in November in plenty of time for the fall holidays. After getting supplies and gas in Las Cruces, I headed to one of my favorite state park campgrounds. 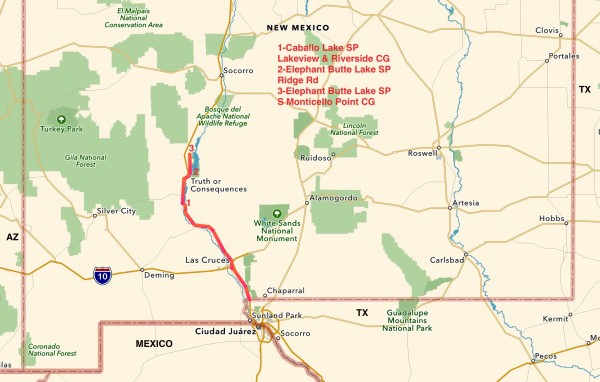 New Mexico
I had a quiet Thanksgiving by myself, in my rig Tardis, overlooking Elephant Butte Lake. A friend invited myself and a few other RVers to have Christmas dinner in their rig at Caballo Lake. The meal was delicious and the visit with long time friends was very enjoyable. For New Year’s Eve, I hid from any celebrations camped next to the Río Grande. Relaxing for a couple of weeks provided a welcome end to a year of far and wide travels.