(Alamogordo NM)
I set out on my long trip back to Florida from Arizona late in the morning. As I tooled down I-10 eastbound in my ‘new’ Lazy Daze, what should appear heading westbound but another Lazy Daze. That counted as my second sign of a great journey. It turned out to be a couple on the discussion board for LD owners.

There were lots of wonderful desert views along the way, and several notable spots I’d like to explore. But, sadly I didn’t have the time to partake this time through. Over 2,000 miles must be traversed in only five days.

After a long day of driving, I arrived at my first overnight stop after dark. Oliver Lee Memorial State Park near Alamogordo NM sits up a canyon aside the mountain. I thought I had passed the entrance road in the night, but luckily I didn’t need to backtrack. On arrival the office was closed, so I found a spot that overlooked the valley below. Site 11 with no hook-ups but a nice shelter with picnic table and fire ring. 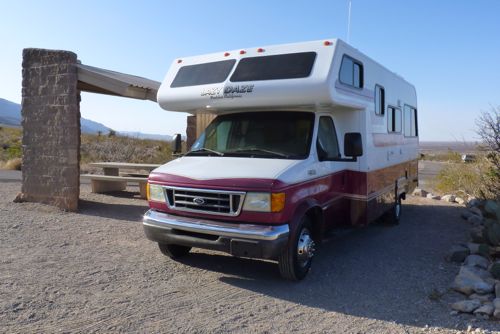 Tardis between a rock and a hard place

Now the challenge was getting into the site, and positioning just behind the shelter for the best view out those huge panoramic windows. It was very dark, it was my very first time backing into a site, there was the shelter on one side and a low rock wall on the other. After several attempts, back-forward-back-forward-back, I finally made it. Oops, I forgot to check for level. Checked the levels on the dash and driver door. It really wasn’t too bad, but not perfect; so I did pick the best spot on the site. Retrieved the blocks from the side storage bin, placed two under the rear driver dualies, then backed up again. Checked levels again, it was close. Drove off the blocks, put another under the driver front wheel, and backed up again. Shazzam!! Almost perfect level in both directions. 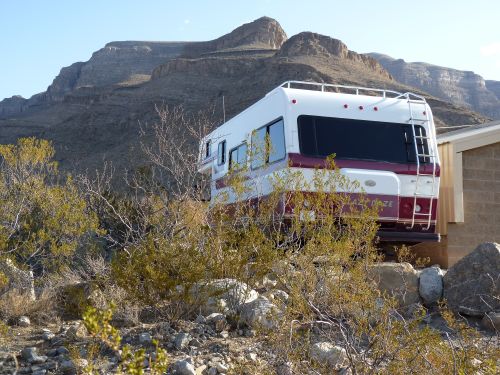 Had a quick dinner and then to bed. No need for the furnace at night, as it only went down to mid-fifties inside; good sleeping temp. I wanted to see that view when I awoke in the morning. And the extra effort really paid off. After breakfast I walked up to the Visitor Center to pay for my site, but encountered the Closed sign; apparently they open at 9am. Hey, it was Saturday and the campers were relaxing. So, I strolled around a bit to find some trails, native plants garden, and an adobe ruin. I’ll have to come back when I have time to explore. When I returned the ranger was ready for me. Cost was $10, a bit more than I expected. However, if I had the New Mexico State Park Pass, it would have been only $5 for that great site with a spectacular view.

No time to dally, so down the road I went. The shortest way was over the mountain pass through Cloudcroft. And, that’ll be another story on the plein air journey.

First Road Trip
The Others