You are here: Home › Lackawanna to Sidney
By Pleinguy on August 10, 2013 in NE
(Dalton PA)
I had a nice visit with my step-brother near Westminster MD, who I hadn’t seen for several years. Then I headed northward into Pennsylvania. Normally, I don’t travel the interstate highway. But, this time it seemed the most prudent path to take.
Trouble found me about 50 miles shy of my chosen camp. The truck just quit running while cruising along. I called my roadside service provider, and they assured me a tow truck would pick me up within an hour. However, after two hours elapsed, I called around and found a tow and shop just one exit away.
We arrived at the shop at closing time, and they allowed me to stay on their lot overnight. There was a restaurant on site, so I had dinner, and then breakfast in the morning. The mechanic got to me first thing and did some diagnostics. As I feared, the fuel pump had died. I’ve read that the E-450 gets about 50,000 miles on a pump. It so happens I reached that mark shortly after leaving the shop. The price was about what I expected, and it included the tow, which will be reimbursed by the insurance.
It was afternoon by the time I continued north. Lackawanna State Park was the camp planned, and I decided to stop there for the night. No pix because it rained most of the time. An electric site was paved, but I couldn’t get completely level. Tanks were dumped on the way out.
Before leaving PA, I decided to fill up on gas, as NY prices were 20 cents higher per gallon. I looked for propane too, but couldn’t find anything within easy distance. 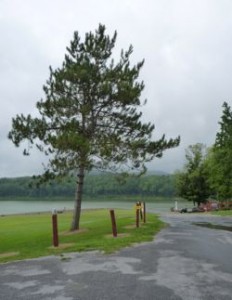 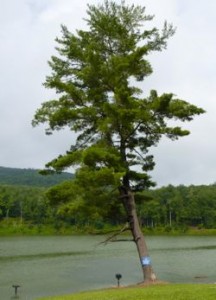