(Albuquerque NM)
It’s been six months since the oil was changed on my rig Tardis. So, it was time to get it done. This is something I could do myself. However, I wanted some other things checked. So, I found a place that does work on RVs and has a good reputation. 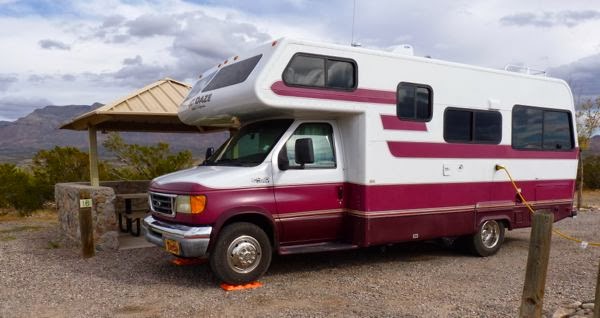 Tardis got new synthetic blend oil, oil filter, fuel line filter, lube, and tires aired. I also had them check the fuel line to the GenSet because it sometimes quits after running for a short while. A fair price and peace of mind was worth the trip.

While in the big city, I got some art supplies for my change to acrylic painting. I picked up gel, glazing medium, varnish, retarder, brush cleaner, and a couple of colors. I decided to go with Golden Paints because they have a full line of materials and are professional quality.

Just had to fill up the gas while there, as it was 32 cents per gallon less than where I had been staying. Now that was a really nice change!

(San Antonio NM)
On the way back, I stopped to see my RV friend John to have dinner and catch-up. We ate at a local tavern that serves a New Mexico style cheeseburger. They include a slice of chili pepper for a change in zest. I hadn’t had one of those in many years, and it was really good too.

Plans for an item that will change the cab layout were shown to John. He creates leatherwork, and is going to make it based on my drawings. I’ll let you know more when I have it installed. Don’t you just love a mystery?

It was late when we got done, so I decided to change my plans and camp at the park where he was staying. Of course, checking out each other’s rig took some time. And, we visited until we both got tired. That night the temps changed and it went down to 14 overnight. But, Tardis still kept me warm and cozy.

The next morning, after breakfast, I went to meet John at Bosque del Apache NWR; a wildlife refuge that attracts thousands of birds. He gets up before dawn each day, so he can photograph the cranes, snow geese and ducks when the sun comes up. Check out his site JH Coxon Photos. On this day, it was in the mid-20s with a cold wind blowing. The ponds were frozen, and most of the birds had wisely changed their location, and flown elsewhere. Nevertheless, John kindly showed me around and pointed out all the good spots for viewing.

(Caballo NM)
Cold and windy was too uncomfortable for me. So, a change in camps was sought further south. I travelled on the Camino Real highway for several miles, going up and down and around hills. It was a nice change of pace from the interstate highway.

Stopped at Wal-mart to resupply, and then continued on to Caballo Lake State Park. The same site I had before was waiting for me in the Appaloosa CG. The weather changed again to rain for a day, followed by warmer temps. So, I decided to stay for a week and enjoy it.

Change can be trying, but often it is a good thing. So far, I’ve enjoyed the changes this RVing lifestyle has brought me.