(Alamogordo NM)
Oliver Lee Memorial State Park sets at the mouth of Dog Canyon, about 24 miles south of Alamogordo. It has a wonderful view of the Tularosa Basin and the Sacramento Mountains. I spent a week there exploring. 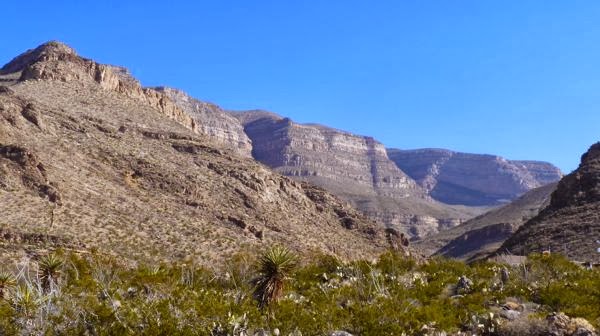 One of the trails ascends up the canyon to an overlook about 3,000 ft above the park. That puts it at around 7,600 ft in elevation. It’s a steep climb up a well marked trail of 6.5 miles one way. I ventured up the Dog Canyon Trail, knowing I’d never make it to the top. 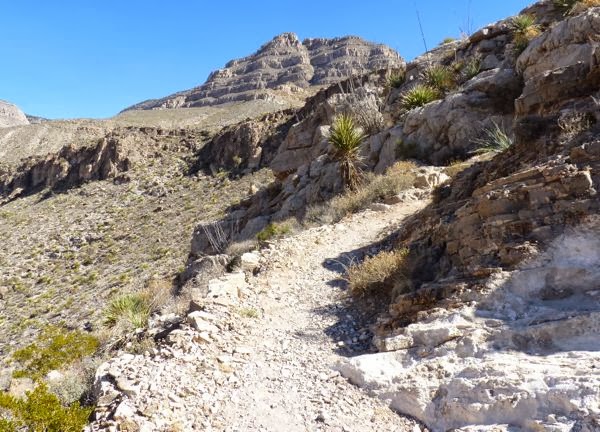 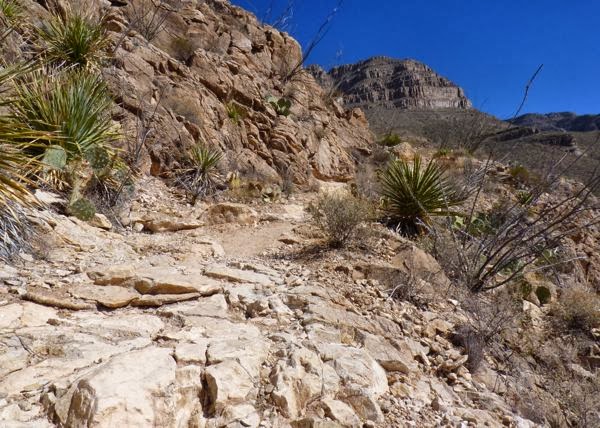 Rocky trail much of the way

The first leg of the hike was a quick 600 ft rise of switch backs to get past a prominence. Much of the trail was rocky, with drop-offs to one side. I regretted forgetting to bring my hiking stick along. 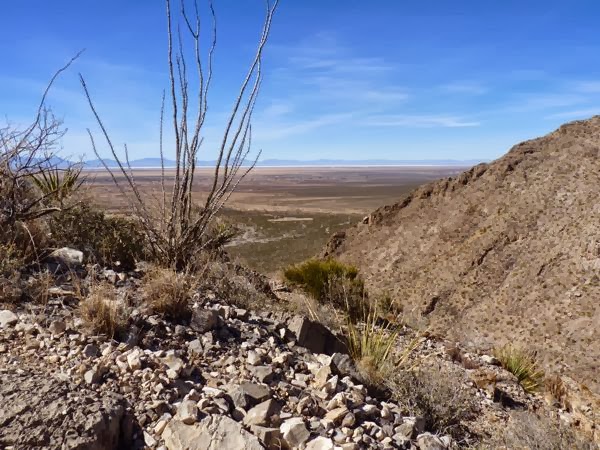 Once past the initial ascent, at a little over 1/2 mile, the trail flattens onto a bench. An easier hike across it brings you back toward the canyon. It begins descending a bit and a nice view of the Tularosa Basin can be seen looking west. Note the light line across the horizon; that is the White Sands National Monument area. 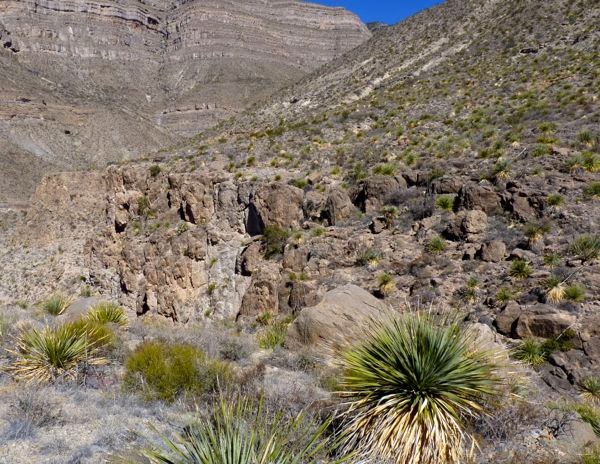 Large ravine to go around

More upward climbing on the trail for 1 3/4 miles takes you past a deep ravine. The trail skirts around the rim, and gives you a good view of the rocky streambed below. Then it continues up to a second bench. 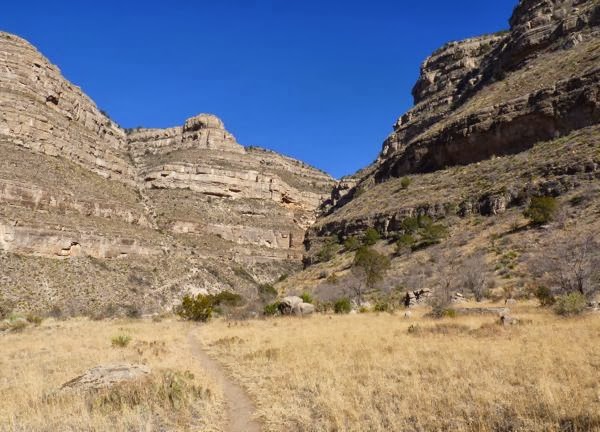 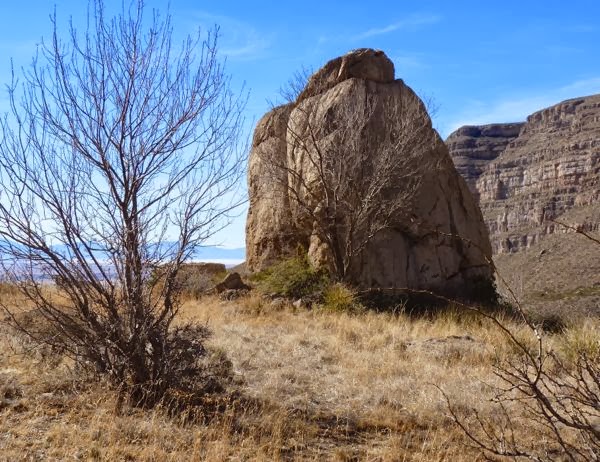 Huge boulder next to rim

A large flat grassy area makes a great place for back country camping. There was more than one spot with trees and large rocks for shade. One particularly big boulder rested on the rim. Just to the back side of it, the ground dropped off into the canyon below. 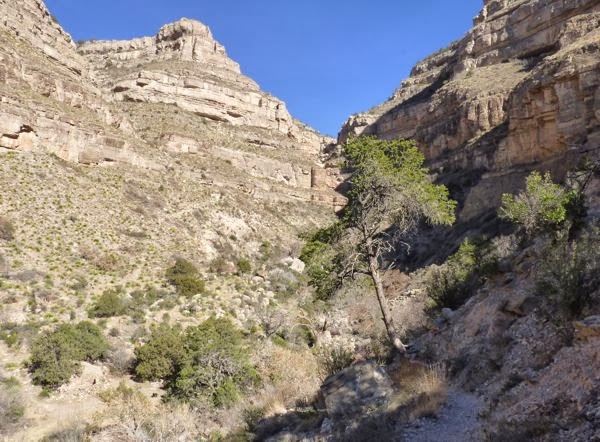 Trail next to edge with tree leaning out

Once again, the trail went up for a way, before starting down into the canyon. One side of the trail went steeply up, and the other side straight down. Just to the left of the tree in the photo was nothing but open air. At the end of the descent was the half-way point. 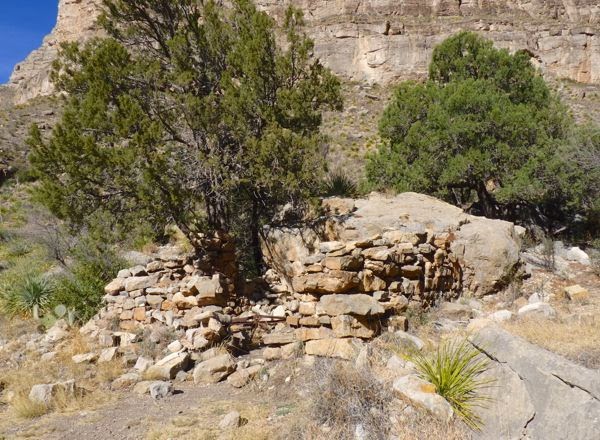 Ruins of cabin half way up

Across a spring fed stream are the remains of a rock cabin. It’s very near to the stream which was mostly in shadow from the adjacent cliff. Lots of juniper and dogwood trees, carrizo and grass crowded the rocky streambed. Water was flowing here, and there was even a pool that was frozen over. 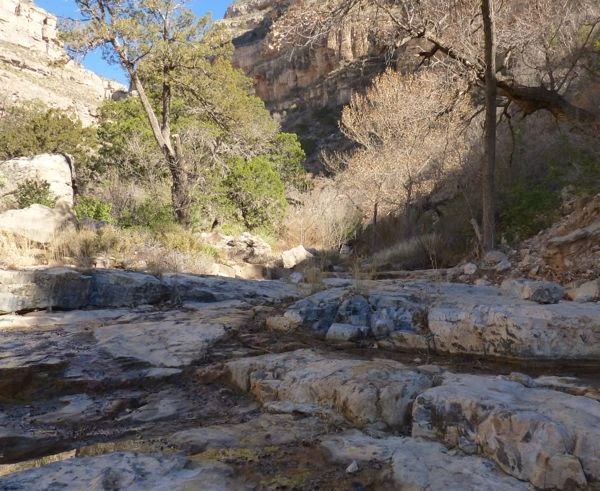 That was as far as I could go. About 1,500 ft increase in elevation, and almost 3 miles, took me 2 1/2 hours. A snack, with a few minutes of rest in this cool oasis, refreshed me for the return hike. I arrived back at camp in another two hours with aching muscles and a sense of accomplishment.